Quick Primer on Interpreting the Support Resistance ideas and taking trades off it.

We post Banknifty trade ideas for short term and swing traders very often in our twitter feed.   So here is quick guide on how to trade the bank nifty ideas, interpret the information and derive meaningful short term, swing or options trade off it.
First of all, a support / resistance is not merely a line but rather treated as a band or a zone, reason being most intuitional activity doesn’t happen off one point. They have enough volumes to trade off one point really.
Will cover it in two quick parts- one how to interpret the levels and two how to trade off the zones.
Interpretation:
Most of the interpretation is simple color code base 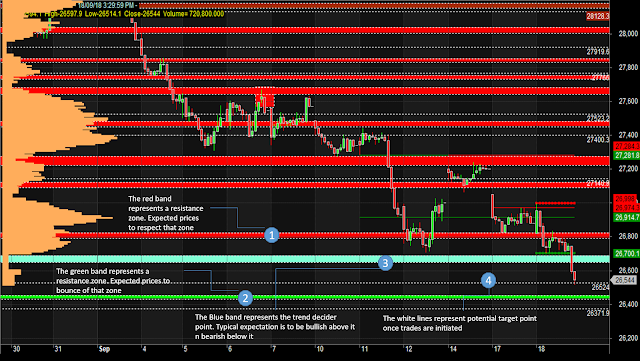 How to Trade the zones:


So this can be traded two ways, aggressive traders can have resting orders at the zone and defensive traders can look for a price confirmation before initiating the trade. My own approach is a hybrid approach if the volatility is low I have a resting order else go for real time markets orders to get a fill and a move. The zones give excellent RR based entry exit points.
Posted by powertrade at 05:38 2 comments


BNF: Last week scenario II was to trade breakout above 27150 zone to test 27500 range, it went there and higher than that as well, testing yearly highs and beyond it.

Challenge is prices have moved far off the vwap levels, and whenever it does a rotation towards vwap or consolidation is a better risk reward scenario, I have marked two times when that has happened recently 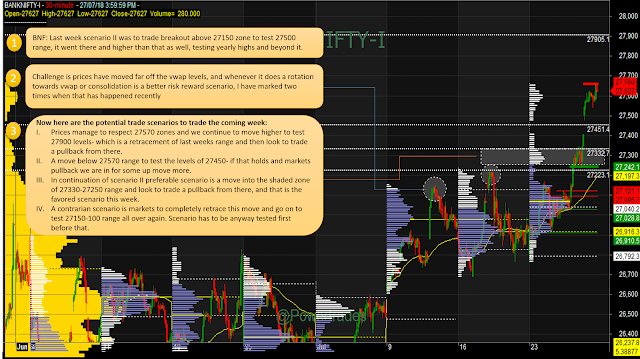 I.Prices manage to respect 27570 zones and we continue to move higher to test 27900 levels- which is a retracement of last weeks range and then look to trade a pullback from there.
II.A move below 27570 range to test the levels of 27450- if that holds and markets pullback we are in for some up move more.
III.In continuation of scenario II preferable scenario is a move into the shaded zone of 27330-27250 range and look to trade a pullback from there, and that is the favored scenario this week.
IV.A contrarian scenario is markets to completely retrace this move and go on to test 27150-100 range all over again. Scenario has to be anyway tested first before that.

Posted by powertrade at 05:14 0 comments

Banknifty futures continue to trade within the range created on the 1st week of june, that’s five weeks in a row, so much so that now a weekly plan almost looks like a daily plan from the range point of view.
But as a trader these are the times you need to continue to stay foot and don’t get complacent about positions and keep the plan going .

Coming back to the charts, Banknifty continue to trade and create value within the 38.2% - 78.2% retracement of the range. So until we get a confirmed close outside the range its best to trade a pullback to the range zones. There are two zones within this range that has good volumes 26540 on the higher side and 26360 on the down side. So here are the few trading scenarios coming to this week.


My own bias still remains on the short side , that essentially means I will be careful with positions size on the long side and be more aggressive with the position size on the down side if a short opportunity looks viable.
Posted by powertrade at 20:36 0 comments

BNF continues to trade within the trading range formed on the 1st week of June. Testing the 78.2 % retracement, from there an upward push up to 27000, 27350 zones is a possibility. On the downside 26480-580 will support immediate support and a move below will be a good zone to test for a downward push

Perspective on Support Resistances & Context of The trend.

Below is one of the trades that I recently posted and how it worked post the trade idea was created. The post is not to talk about the profit of the trade etc. but what are some learnings and observations from the trade set up and such patterns keep occurring and can be used for future trade set ups as well.
First the trade Summary:
Posted on 20JUN: #USOIL #CL_F consolidating in a range. likely to take off if 66 is taken out for a quick test of 68.5-69 range (Price then 65.47)
Result: Price on 23 Jun : 69 USD
So how was the trade idea generated in the first place: we had series of lows on lower volumes and any sustained follow ups, while a big resistance zone laid ahead at 66 levels where we had a series of tops. So what that meant was while the buyers were not active the sellers didn’t find any follow up trades. What could this mean be that there were no new sellers emerging at the lower levels. Hence a contrarian buy idea if the level was crossed as that would mean sellers would have to force close the trade and could lead to short covering.


USOIL time for take off by PowerTrades on TradingView.com

How did the trade span out?
So, many lessons and pointer in a single trade journey. As a trader this is the observation and process to take home irrespective of the time period we trade. . S/R alone can lead to lot of whipsaws on false highs or lows. Trading on the alone could have led to 2 false trades in the above trade journey.
Trying to understand the context of market can do, in conjunction with support resistances is a powerful tool
Posted by powertrade at 12:31 0 comments

Banknifty bucked the trend for the past few weeks, indicating a potential near term top
formation in the charts. This weeks most traded volume at 26450 will mark a significant
resistance zone and should be the range for the intermediate top ; i.e. to mean if we hold
the theory that markets have marked a top here, this level got to be respected, else the
hypothesis falls flat.

The downside was arrested late hours on Friday , when markets took  support at an
intermediate levels, and until we break below 25650 zones we are likely to see some
consolidation and short term pullback possibly as well. This also coincides with NF, which
found a base near prev zone of 10560 levels.Now we could play out the below 3 scenarios
and plan my trade as per that-
I.pull back to test the 26050-26100 zones and keep within the range of 26150-26750 in coming sessions
II. pullback to the range of 26050-26150 and manage to breakthrough to test 26450 and higher again
III.Break through below 25750 and and test 25320 zones.

I would try and potentially trade a short term pullback as that offers a lower risk reward if we get a
favorable set up , or /and look for a pause and turn around from the 26050-26150 zones towards the
downside. Overall at higher levels keep a bias of short on rise to test the weekly lows and lower
levels of 26500-350 zones , this until 26450 is cleared. 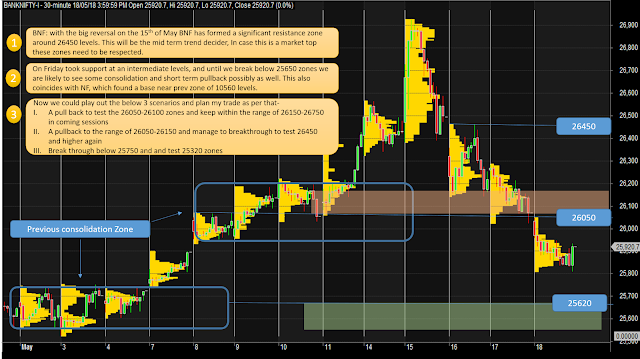 Posted by powertrade at 20:30 0 comments

Banknifty marked a major consolidation in terms of the smallest weekly range on the weekly charts.
A quick recap of the previous week shows that the low marked couldn’t even get into the previous week’s value area, indicating that buyers emerged aggressively in dips. This resulted in the value area shifting higher as well significantly.
This indicates that the coming week will continue to be a consolidation zone with an upward bias for the traders.  The Banknifty PCR remains at 1.45 and the max pain at 25100. Support is likely to emerge in any dips to 25000-24940 zones and should see buyers emerging until markets cracks below that levels or breaks 24850.


On the upside resistance will be seen @ 25540-25600 zones and should see pull backs from there. Until the marked range in green and red doesn’t break in the below volume profiles charts we should see markets consolidate and set up base for the next direction.

Posted by powertrade at 05:30 1 comments

Get Market Blog on Email